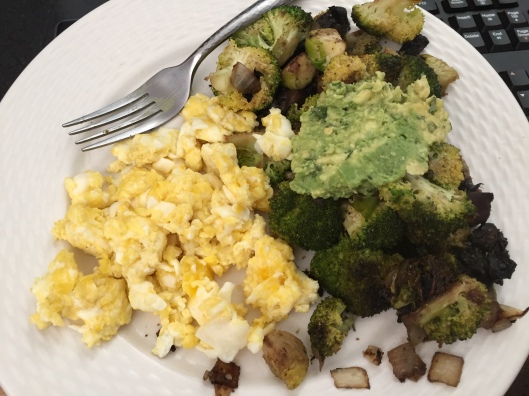 I’m actually feeling moderately accomplished this week! I’m getting back into my groove of waking up really early and getting things done before the boys wake up, and it just makes my days go more smoothly. Even if I don’t get much done before they wake up, that time to center myself makes a huge difference in how I approach the day.

Something as simple as having eggs and veggies for breakfast instead of oatmeal makes a big difference for me, probably because of the extra protein. It doesn’t hurt that I generally have a chance to clean up all the dishes before the kids wake up too, because Jonah likes to open the dishwasher and jump on the door if I turn my head for even half a second. Gotta love crazy toddlers!

Possibly the greatest accomplishment of the week (or even the year!) is that Micah is finally pooping in the toilet and wearing his big boy underpants even when we’re not at home. We managed a trip to Costco on Saturday and even though he took a nap, we didn’t have any accidents. I carry at least two spare outfits now, but I’m so excited with the progress he’s made this week! Once he’s really comfortable with always being in underwear we’ll start to tackle eliminating pull-ups at bedtime, but one pull-up a day is a huge improvement from 3-6! Jonah has been sitting on the potty a little bit too, and I’m hoping the excitement of Micah in underpants will catch on for him too! 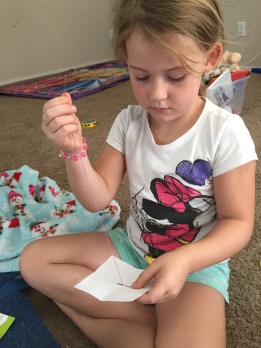 This is really Kinsey’s accomplishment — she’s learning how to cross stitch, and she’s doing a really good job! She has a little trouble with the counting and she’s not super confident with the needle yet, but by the time she finishes this I think she’ll be a lot better than me (I’m not very good, but she’s 6 so I think that’s impressive 😛 ) I love finding new crafts for the kids!

We also managed our first zoo trip of the year, and the kids had a blast! Micah actually walked the whole time (instead of riding in the stroller) and he did better than Kinsey did. She got tired of walking and asked to ride in the stroller, while Micah flat refused to stop walking no matter how tired he got. We didn’t see everything because it started to get hot, but we all had a ton of fun and we’re excited to go back this week!

The zoo must have worn them out, because they all passed out for the ride home. 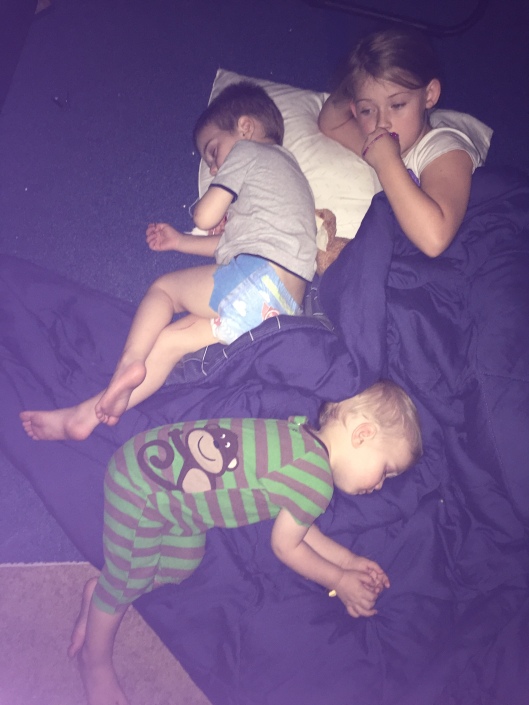 We’ve turned a bit of a corner with Jonah also this week. Like most kids I’m sure, he has trouble sleeping if he’s not forced to stay in his room or his bed, because he just gets overstimulated. That kind of stinks because he’s left out of sleepovers, and he’s old enough to be sad about that. This week I let him cuddle with Kinsey and Micah for just a few minutes before I put him to bed, and he totally passed out cuddling them. That might seem like nothing special, but it makes a pretty big difference for the kids. 🙂

I also made my first apple pie this weekend, and I think it came out really pretty! It was for someone else so I didn’t get to taste it, but I hope it was decent. I’m just happy I got the crust pattern right!

I’ve also been staying active, either walking or working out nearly every day. More details on workouts later in the week, but I’m just feeling accomplished that I’m starting to get back in a healthy, productive groove!

What are you proud of accomplishing over the last week?

crazyfitmommy@gmail.com
Some days life is insane, nothing goes as planned, and you find yourself figuring out dinner at 9pm when you have a research paper due at midnight. Having a backup plan is so important, otherwise these are the moments we’re all most likely to go off the rails and do something we’ll regret. Freezer meals, having leftovers of something healthy, or even just knowing which pizza place close to you just started promoting their new cauliflower crust. This is a cauliflower crust pizza with some veggies (onion and olives) and some meatballs for protein — is it as healthy as a home cooked meal? No. But it’s low carb, has protein and veggies, and it won’t throw off my goals or make me feel sick. Sometimes balance means finding a healthy way to order a pizza so you can finish your research and get to bed at a decent hour! #healthyeats #thatdoesntlooklikecauliflower #balance #lowcarbhealthyfat #ketofriendly #bodyafterbabies #cauliflowercrust #glutenfreeliving #fuelyourbodyright #youcandothis
Someone is practicing to be a stunt man lol. Love how much the boys love getting involved in my workouts! #teachthemyoung #activefamily #activekids #moveeveryday #familyfitnessfun #littlestuntmaninthemaking #noididntreallyknockhimover #hetotallystagedthis
I’ve tried a lot of keto recipes lately, but so far nothing has been as good as the simplicity of pairing a protein, a green veggie, and a healthy fat. Simplicity always wins! #simplehealthymeals #lowcarbhealthyfat #ketofriendly #glutenfreeliving #healingwithfood #lowcarblifestyle #healthyeats #bodyafterbabies #eatrealfood #paleoish #grainfree #crazyfitmommy