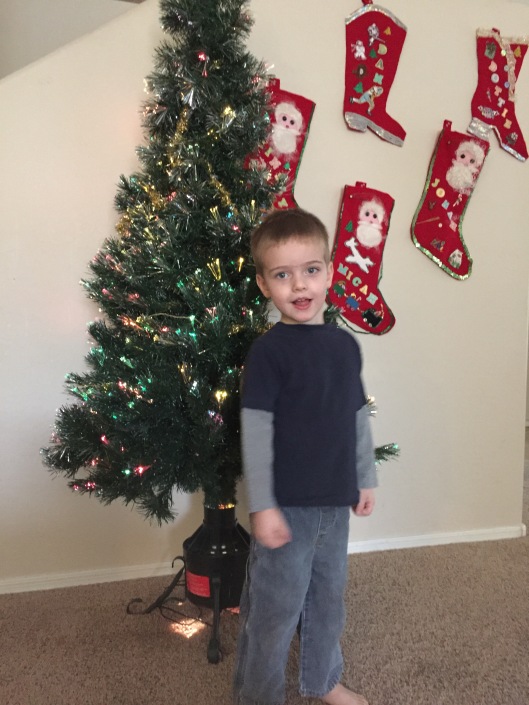 Merry (slightly belated) Christmas! This month has really flown by, and I can’t believe the year is nearly over already. 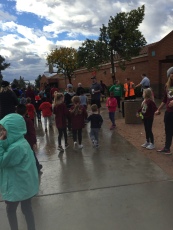 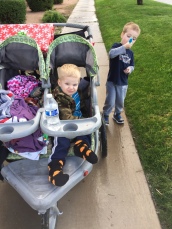 We started the Christmas weekend with the Jingle Jog at Kinsey’s school, which is a traditional walk/jog the entire school does with their families on the last day before Christmas break. Kinsey wouldn’t stay still for pictures (that’s the back of her head holding Micah’s hand) but the boys did once she went back to class. Micah ran almost the whole way, and beat Kinsey by more than 5 minutes! I also love how we ran 2 miles in December, but the kids got popsicles because we live in Arizona and it was a chilly 65 degrees.

Kinsey got to open her big present a few days early, because after 2 years of asking we bought her tickets to see the Nutcracker. She really loved it, although the poor kid always manages to have someone super tall in front of her. She spent at least half of the show in my lap so she could see, but it didn’t seem to dampen her spirits at all.

In preparation for Christmas, the boys took out as many of their toys as possible to make sure the playroom was a huge mess — but they played together without fighting so I’m totally okay with it. I decided to keep the nice tree downstairs, but still wanted upstairs to look festive so I hung up some lights and a felt tree for them to play with. Jonah just wanted to take off all the ornaments and crumple them, and Micah spent his time pulling the lights off the wall. Toddlers can be challenging lol… 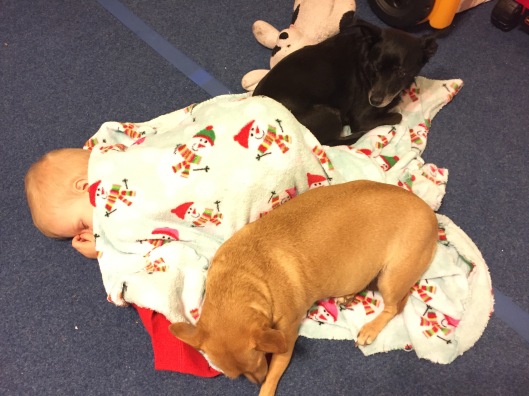 Because it’s not our year to have Kinsey for Christmas morning, Santa came on Christmas Eve morning for us. I woke up after about an hour-long nap (seriously, Santa has long hours) and found that Jonah had snuck out of his room into the loft, and the dogs were cuddling with him. Seriously melted my heart! 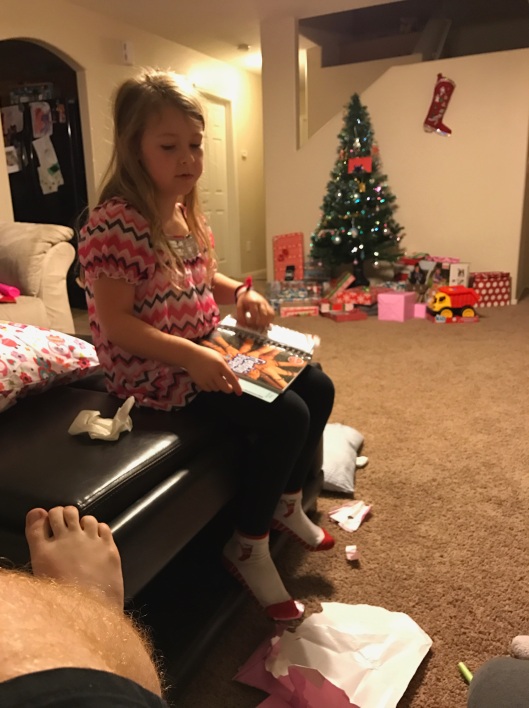 My in-laws got there around 6:45 because they didn’t want to miss the present opening and we didn’t think we could hold off the kids for more than a few seconds after they woke up.The boys were pretty clingy so Kinsey decided to play Santa and hand out all the presents. 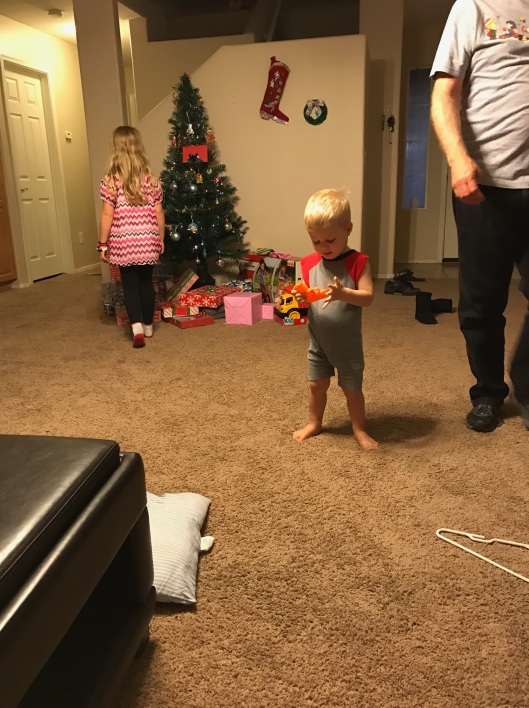 Jonah loved opening gifts, but had very little patience with the whole process. He decided any gift he wanted was his, which made Micah a little crazy, but it was adorable to watch.

Micah was much more attentive this year, and actually wanted to stop and open every box so he could play with the present before moving on. 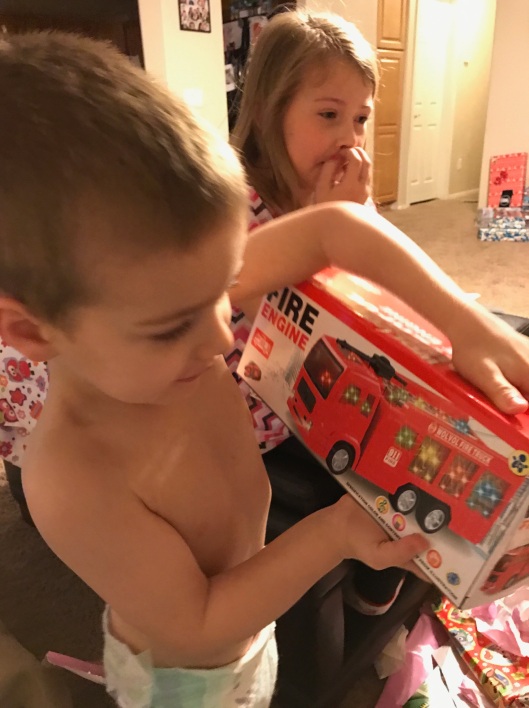 He especially loved the lights on this truck, even if mom and dad aren’t always a huge fan of how much noise it makes. 😛 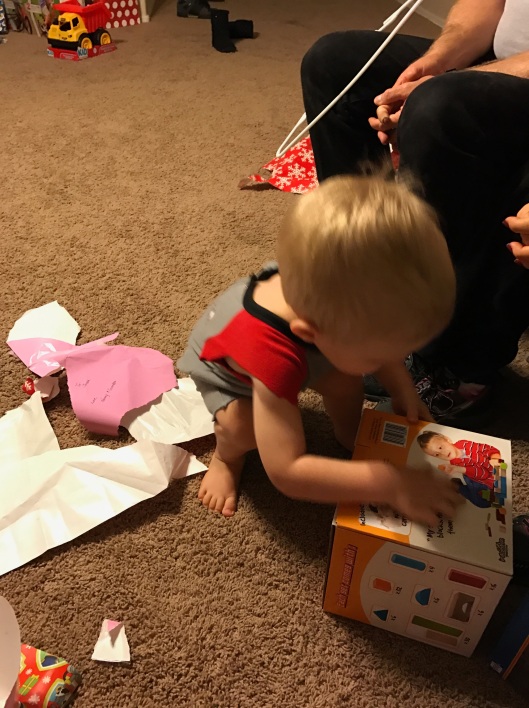 When Jonah opened his blocks from my parents, he actually snuck upstairs with the box so he could play with them without Micah touching them! 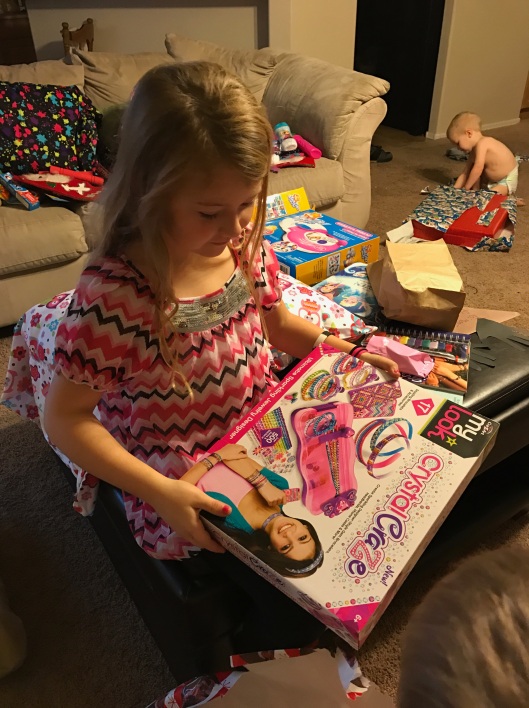 Kinsey got a lot of crafty stuff this year, and I think it’s going to be a fun winter break. 🙂

Micah was freezing so he stayed wrapped in his blanket, but still refused to put any clothes on. Boys baffle me sometimes…

They’re also pretty obsessed with these walkie talkies, although Jonah still needs some help to press the button down. 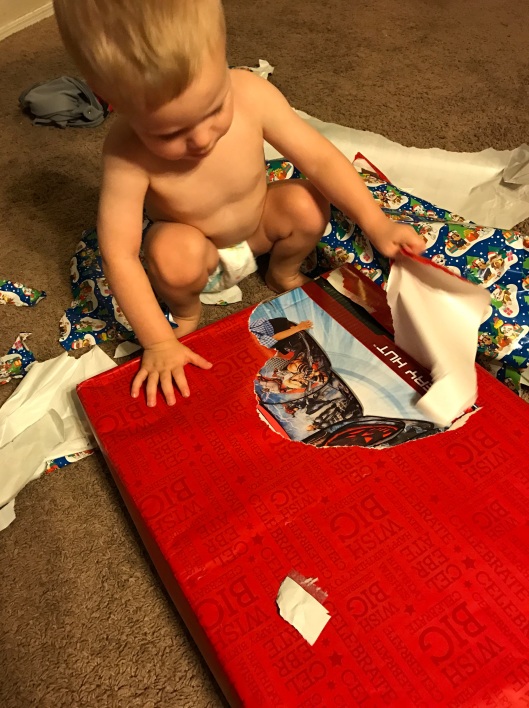 Once Jonah had his diaper changed he also refused clothing — I swear they’re future nudists!

Kins was a really good Santa, she cared more about making sure everyone was opening something than whether she was. 🙂

Kinsey’s new outfit from my in-laws — super cute! She’s growing so fast, I’m glad she’ll have at least one dress she can wear to church for the next few months. 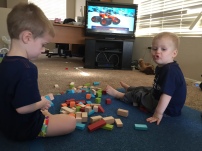 The boys have spent the last two days playing with all of their new toys, and even though there’s some fighting I’m proud that they’re sharing. The only thing I’m sad about is that with everything being so crazy this month we haven’t taken them to see Temple lights yet.

This was 4 years ago, right before we got married.

I hope everyone had a great Christmas, and that you’re enjoying the holiday season as much as we are!

What traditions do you have during the Christmas season?

What goals do you have for the new year?