I think the kids would say that the best part of our weekend was the zoo trip we took on Friday with some members of a mom group I’m part of.

I love that no matter how often we go to the zoo, there’s enough to do that the kids are never bored and never feel like they’re seeing the same thing over and over again. It was especially nice that Kinsey was with us! We usually go while she’s in school, so I try to make sure she goes a few times during her school breaks. 🙂 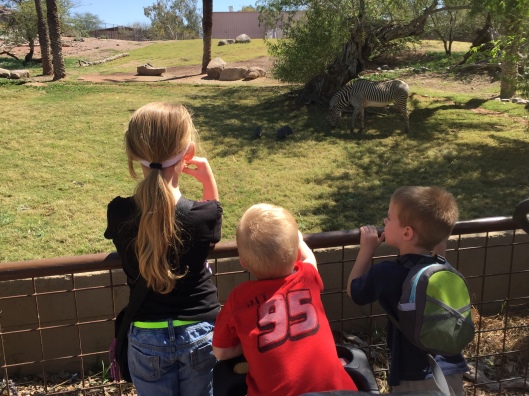 What happens when you get sunscreen in your hair…

The kids were totally mesmerized by the otter, probably because I don’t think they’ve ever actually seen him before. There’s two in the enclosure, but they’ve been really well hidden almost every time we’ve been there.

Poor Jonah — it looks like they kicked him off the seat but I swear he chose to sit down there. I love watching Kinsey teach them…

This time they let the kids brush the goats, and they loved it!

I’ve actually never spotted this area before, but it’s the perfect photo spot! Jonah looks like he disagrees, but I swear I’m still right. 😛

There were a couple more animals behind the clam shell, and the kids wanted to take pictures in those too of course.

Micah wouldn’t go near the crocodile though, he was convinced it was real and it was going to eat him! 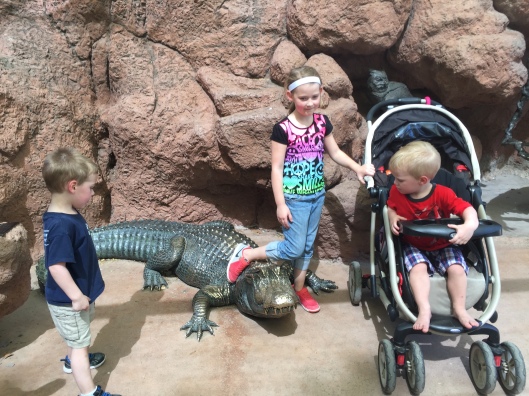 We didn’t bring swim suits because I didn’t realize the splash pad was open, so the kids got to air dry in the sun. On the bright side, it was 90 degrees so it dried fast and helped them feel really cool. They were all exhausted though, all three kiddos fell asleep on the way home. 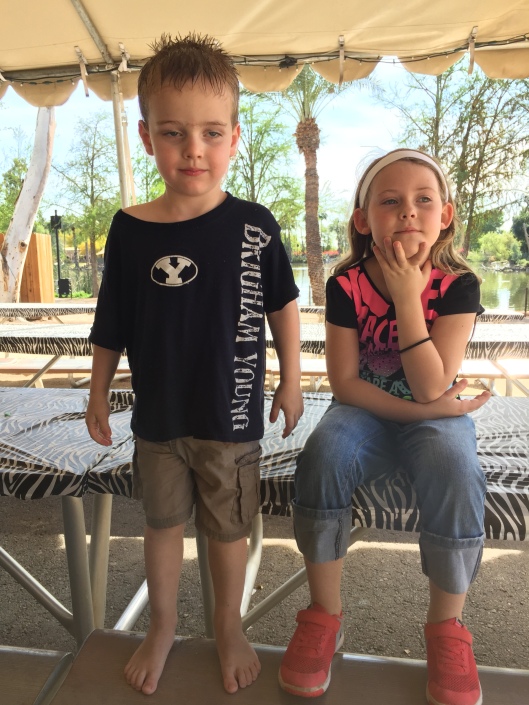 We also found time to see a movie, which the kids all loved. I swear the dollar theater is the best invention of all time! I also love how they don’t seem to care that I bring my own snacks — Harkins would never allow me to carry my purse in looking like this! (For the record most of those snacks are really unhealthy, but the movies aren’t a frequent occurrence for us so I relented.

The weekend was otherwise uneventful. I finished my training to work at the gym I’m planning on joining, did some work on laundry, and kept the kids out the my husband’s hair while he finished online traffic school. Based on his face, it was even less fun that it was when I had to do that 2 years ago!

Goals for this week include finishing catching up on the laundry, passing my test to start working as a transcriptionist at home, keeping up with my workouts/nutrition, starting to study my NASM materials, and doing another whole home decluttering because the boy scouts are having a charity yard sale this week. It’s going to be a great week!

What plans do you have this week? Any big accomplishments last week?