Since getting back from vacation, I’ve had a lot of trouble getting back in the swing of getting up early every morning. Part of the reason is the boys…

no matter what I do (including Melatonin) they continue to sleep terribly, wake up in the middle of the night, and generally make it hard for me to get any uninterrupted sleep. And invariably when I actually drag my hiney out of bed early, one of them wakes up in a terrible but super clingy mood. On one hand it’s frustrating, but on the other hand I just watched my sister send her son off to college….so I’ll take morning snuggles even if I have work to do! It won’t be long before I have to fight just to get a hug I’m sure… 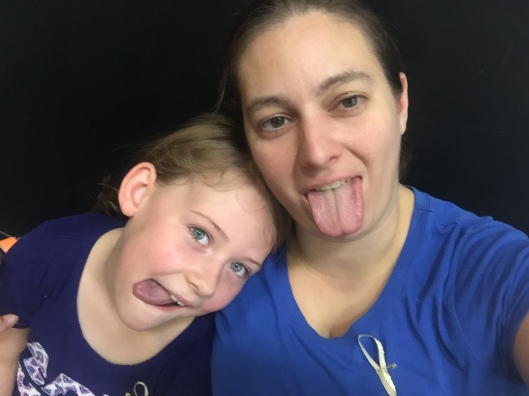 I wish I’d taken more pictures, but Kinsey and I got to do a charity WOD (Workout of the Day at Crossfit) together to benefit childhood cancer patients about a week ago. She alternated between complaining A LOT and loving it, but this week she’s already asking when she can workout again with me so….I’m going to start doing some extra shifts at the gym so I can look into kid’s Crossfit for her. I’m not sure if she’d love it, but a few extra hours in the daycare to give her the opportunity to try is well worth it to me! (Of course that’s pending the hubby’s approval lol, I haven’t converted him to Crossfit just yet…) I also had the privilege of singing the national anthem to kick off the WOD, and it really made me feel good to be able to contribute in some small way. 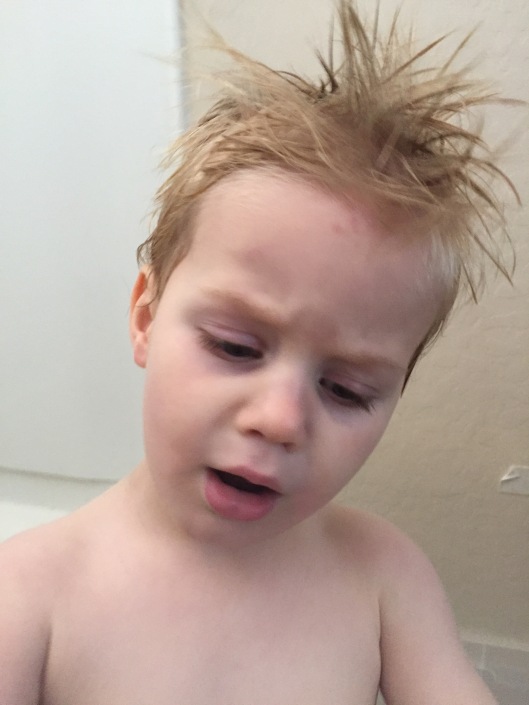 Jonah needed a bath after Micah decided to pee on him ><

The boys have been getting along really well (except for the whole peeing incident anyway) since our trip, and I like to think it was all the unstructured playtime they got together in the backyard. To that end, my goal this week is to get up at 4 every morning and spend at least an hour in the backyard before the sun comes up so it’s completely usable ASAP. It looks like we’re going to be getting one of those big plastic play sets from a member of our church who’s getting rid of one, and I absolutely want the backyard to be ready for them to play in it right away! I’m so excited for the kids to actually be able to use the backyard, and I think it’ll really be a blessing in terms of being able to get things done around the house. I eventually want to pull out all the gravel and make the whole thing grass, but I’m taking it one step at a time.

On a side note — am I the only one who finds the whole Arizona desert landscaping to be completely ugly and useless? Yards are decorated with rocks and cactus instead of grass, and I feel like it makes it so much easier for kids to get hurt playing outside. I know it saves on water, but I still don’t like it lol. 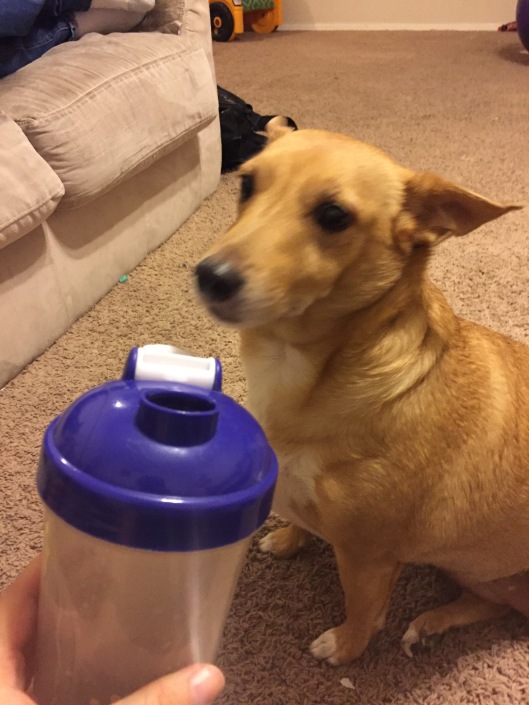 I’ve also been getting back to a more strict meal plan since getting back, so my BCAAs and protein have been a daily thing again. Apparently it smells good because the dog kept trying to lick the cap lol.

This picture is one of my favorites. We’d already gotten up early for church, had lunch and played a bit, and then dropped Kinsey off with her mom, so the boys were exhausted. I promised them we’d do something fun when we got home because they’re always really sad when Kinsey has to leave, but instead they both completely passed out. It was so adorable I had to pull over and take a picture (and fix their seat belts — Jonah is constantly messing with his!) to send to the hubby because it was just too sweet not to. Of course then I carried them inside and they wouldn’t wake up for 4 hours no matter what I did, and then they were too hyper to go to sleep — totally a vicious cycle. But moments like this help me forget my sleep deprivation and completely melt my heart ♥

I wish I’d gotten pictures of all three kids at church yesterday, but it got crazy and I just forgot. #bloggerfail Every year, the kids (ages 3-11) spend months learning songs for a program that they perform in front of the congregation, and our program was this week. Kinsey’s been doing it every year since she was 3, but this was Micah’s first year. I teach the 8-year-old kids, so I had two of my own kids in the program, but I was up there helping the kids I teach too.

Kinsey did amazing — she only gets to practice about half the time other kids do because she’s with her Mom some Sundays, but she still managed to learn the songs and her part so well! I’m super proud of how hard she worked to make sure she knew everything. Micah did great during practice, but during the actual performance he refused to sit with his class and sat next to Kinsey instead, and then I had to carry him to the microphone to say his part. I was also watching Jonah because my husband wasn’t able to make it to church, so it was very interesting — but he remembered his part and said it nice and loud. He tends to get very shy in new situations, and I think he did super well for a 4-year-old! 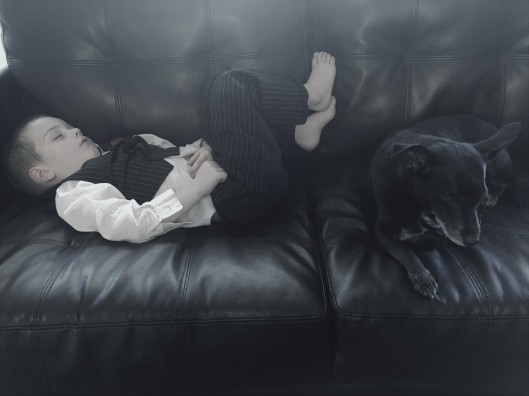 It was super tiring for them lol, and we had a pretty lazy afternoon afterwards before heading to my in-laws for dinner. All in all it was a great week!

Do you have a morning routine you follow to help you ease into the day?

Arizona landscaping — love it or hate it?