Once again linking up with Meghan for the Week in Review!

We started out our week with a trip to the library, which is something I hope to do at least once a week going forward! 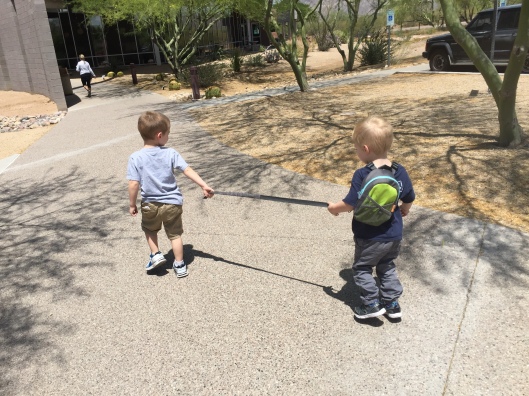 We tried not bringing the stroller for the very first time, so Jonah wore Micah’s old backpack so I didn’t have to chase him so much. Micah took responsibility for holding Jonah’s strap (I just can’t call it a leash!), and much hilarity ensued. 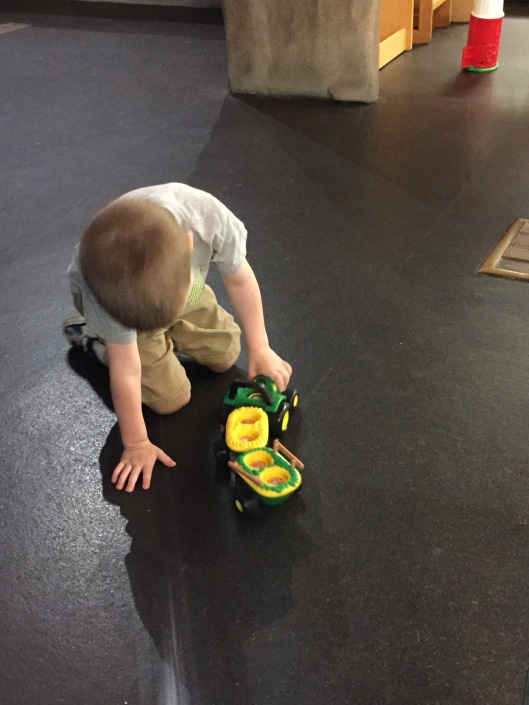 They did pretty well until the very end, so next time I’ll just make sure not to stay quite so long. They had a great time in the castle area playing with different toys… 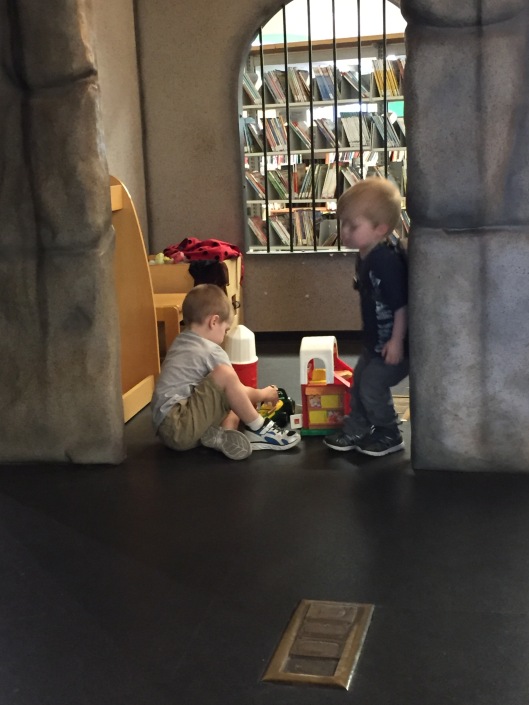 …and actually played together without fighting so much! 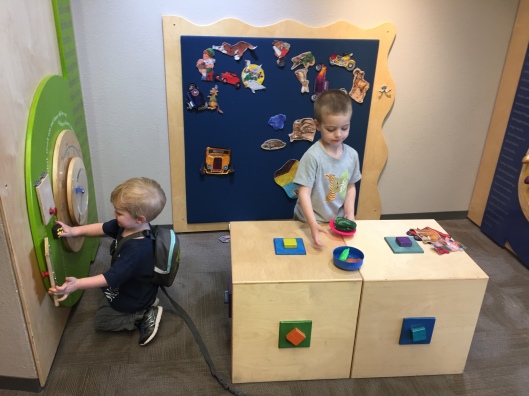 They even played quietly next to the stacks so I could pick out a few books for them. Until the meltdown at the end it was super nice!

Micah held a dinner party and served everyone cake…

and there was a little bit of a fight over who got the most cake lol.

Thankfully on the way home things calmed down, and the boys shared snacks while we drove home.

I made it to crossfit nearly every day and I’m feeling really good! My diet could still use some tweaking, but working out hard always helps me keep my diet in check 🙂

So many red faces! lol

A bit random, but we also cleared out our driveway and got rid of our truck. I’m sad, but we just didn’t have the time to fix her.

On Thursday night, Kins and I went to a Mother-Daughter pampering night at church, and it was so much fun! She tried so hard to avoid this picture, but I finally got it 😛 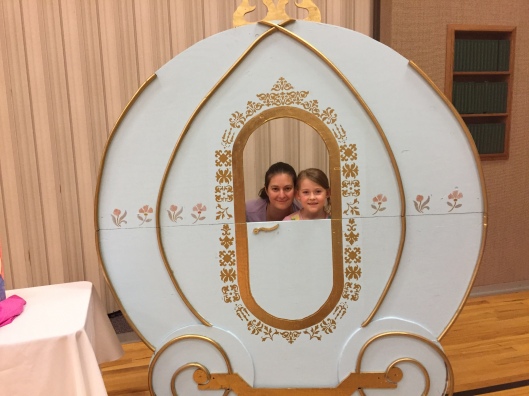 The sweetest manicurist I’ve ever had 🙂 She did a really good job too!

We also made a bow, got sparkly pink slime, had ice cream and popcorn, watch some Finding Nemo, and saw a ton of spunky attitude! (Well I did anyway :P) I’m so grateful to be able to have an early Mother’s Day with her, makes it easier to not be disappointed that we’ll never have her for the actual day. (Not that I think we should, she needs that special time with her Mom. I just can’t help being a little sad about it too.)

We had a little visit from my in-laws, and Jonah stole my phone and actually took some pretty decent pictures! Love that crazy hair and big smile! 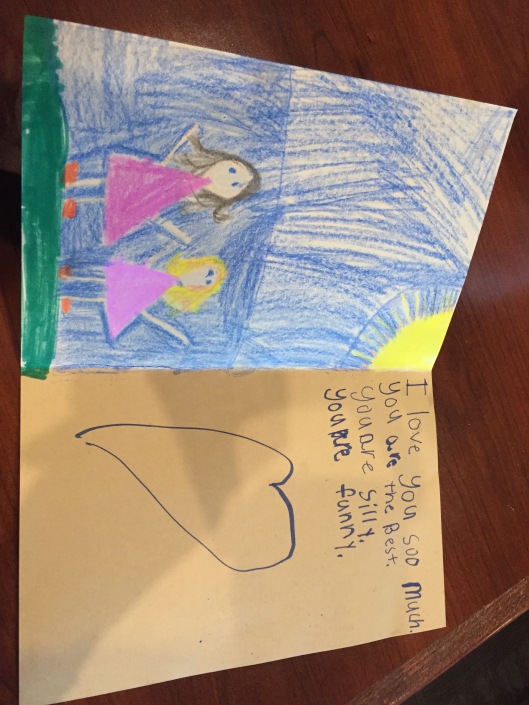 Kinsey had to go back to her Mom’s Saturday night so she’d be ready for Mother’s Day, so the four of us had dinner at Barro’s as our little celebration. She snuck this card into the restaurant to surprise me, and I almost cried — I couldn’t possibly love this girl more!

We sat in the kid’s area so they had small tables, Nick Jr, and a play area.

That made the eating take forever, but it was nice to not have to make them sit at the table the entire meal.

Plus it made for some seriously funny pictures!

Kinsey wanted to take a picture of Jonah, and this was her favorite. She really captured how exhausted he is, while he stares blankly at the TV 😛 She loves her brothers so much! It’s always sad when she has to leave, they feel kind of lost without her.

We were all sad when she left, but we still had a really nice Mother’s Day. I was able to go to Relief Society (normally I would be with the 8 year old kids), and they had a beatiful lesson and a seriously crazy amount of food. There were sweets of all kinds, and then a bunch of veggies, hummus, and fruit. It was so yummy, and I love that I didn’t have to eat something I knew I’d feel bad about later.

Of course I still got a cookie, but I gave it to this cutie. He usually has his own class but he was super emotional and wouldn’t stop crying so I let him come with me. He was super quiet and cuddly for most of the hour, and not distracting at all. He’s getting so grown up! 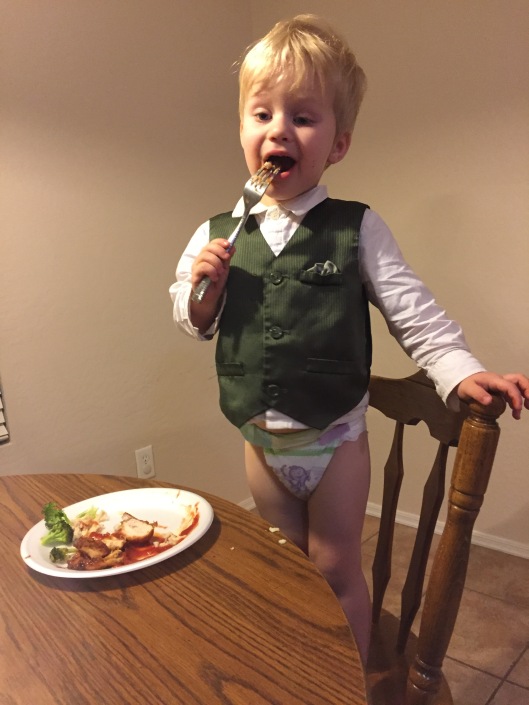 When we got home, Micah immediately took off his suit, but Jonah flat refused to take his off (except the pants, he decided he didn’t want pants at all). When we hit bedtime he screamed and cried because he really wanted to sleep in his church clothes, but I didn’t want him to be that uncomforable and hot. At least he doesn’t complain that he has to dress up for church! 😛

This is kind of a random picture to be posting, but I was challenged so I have to lol. On the left is my before pics from when I started working out again. I’ve only lost about 15 pounds, but the inches are so much more than I realized, especially in my stomach! Crossfit and Beachbody on Demand have been kicking my trash lol, and it’s nice to see that waking up at 4 am and working my hiney off every day is really yielding some results. I’m excited to see what my June pics look like after bringing up my workout intensity as much as I have!

What are you proud of accomplishing this week?