Man, this week has just flown by! It feels like I was just linking up with Meghan, but somehow it’s already Monday again.

We do a lot of rushing around in the mornings, so breakfast is often peanut butter sandwiches and fruit that can be eaten in the car. I don’t think that’s awful but I don’t think it’s ideal either, so I’m really proud that I’ve been getting up early enough to make the kids oatmeal or egg sandwiches most days this week. They’re such picky eaters that I really try to make sure they’re getting enough protein and micro-nutrients at each meal, or at least boost these as much as I can. I’m not above putting extra alfredo sauce on pasta to hide some tuna fish, flax and ground chia seeds in their oatmeal, or telling them the kid’s vitamin packs I buy are just juice so they’ll actually drink it. I’m going to turn into one of those moms that purees veggies into mac and cheese if I can get away with it!

It feels like a silly accomplishment, but Jonah is now willing to play with (and not eat) play doh with only minimal supervision! This basically means I can was dishes and clean the kitchen without him climbing in the dishwasher or grabbing dishes and throwing them, so it feels like a pretty big deal. I think he’s mostly excited he’s allowed to use a knife, because he’s always trying to grab sharp knives while I’m washing them. Who would’ve thought a $15 play doh set would be such a sanity saver? 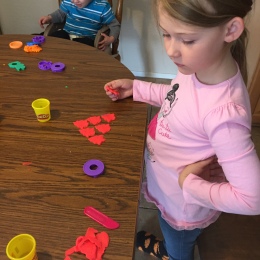 The older kids had a great time with it too. I love finding activities they can do together that don’t bore Kinsey to death, which can be a challenge because of the age difference.

We even worked on some of our letters, and Kinsey has decided she’s my teaching assistant and made Micah practice more while I washed dishes. I’m homeschooling the boys for preschool, and play doh has been a fantastic too for learning colors, letters, shapes, animals, and I know it’s strengthening their little hands and fingers too. It’s also way more fun than workbooks, and doesn’t require anyone to sit still. 🙂

Even though I’ve had a bit of a cold the last week, we still managed to stay really active as a family. I didn’t do much in the way of structured workouts, but we walked nearly every day, sometimes more than 6 miles! Micah has hit a point in his skating proficiency that he can manage to go around the short block near our house, and even though it’s painfully slow sometimes it’s completely worth it. He’s so proud of himself, and it made him feel like such a big boy! We got him a balance bike for Christmas and I can’t wait for him to try that out on our walks too. He was sad he couldn’t keep up with Kinsey and I think he’ll be faster on the bike. We’re thinking of getting Jonah skates for Christmas (is he seriously old enough for that?! No idea when that happened) and I’m excited to have the choice to ditch the stroller and let the kids stretch their legs a bit. The idea of walking without a stroller is kind of weird, probably because I haven’t left home without one in more than 3 years, but it’s so good for them to be running around and not trapped in the stroller.

We’ve also managed some trips to see Christmas lights, which is one of my favorite things about this time of year. We’ve been walking in the evenings because our neighborhood has a lot of lights, and on Saturday we drove to the Loop of Lights while its still open to vehicle traffic. Warm pajamas and hot chocolate are absolute necessities when we go looking for Christmas lights!

Another side note — how grown up does Kinsey look without her front tooth? She’s like a little adult, I can’t even stand it. 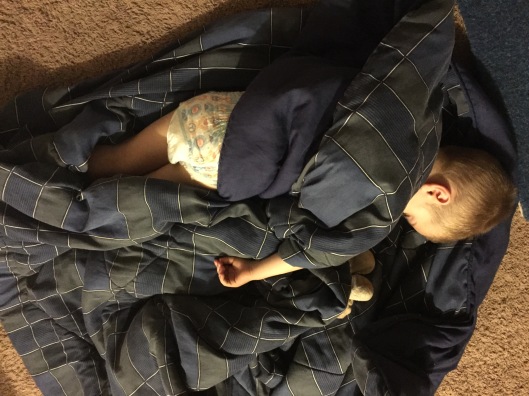 We’ve been doing pretty well with our bedtime routine, and the boys survived their first experience with jet lag without much complaint. They still have mildly weird sleeping habits though. They both still climb out of their beds and sleep on the floor every night, and they have a tendency to strip out of their pajamas and still not completely cover themselves with their blankets. I cover them several times during the night, but I always wake up to some version of this — I guess his hiney was too warm? 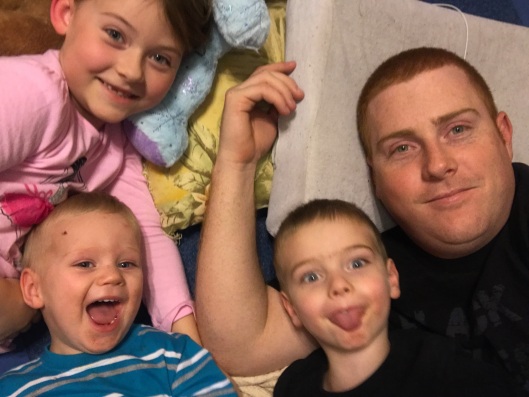 The rest of the week was basically cuddles and silly games. Danny managed to get this pic as we were getting ready to watch Rudolf, and I think it’s one of my all-time favorite pictures of them. #mywholeworld

And now I’m off to finish some freelance projects and hopefully workout before the kids wake up.

What have you been up to this week?

5 thoughts on “Week in Review!”

crazyfitmommy@gmail.com
Some days life is insane, nothing goes as planned, and you find yourself figuring out dinner at 9pm when you have a research paper due at midnight. Having a backup plan is so important, otherwise these are the moments we’re all most likely to go off the rails and do something we’ll regret. Freezer meals, having leftovers of something healthy, or even just knowing which pizza place close to you just started promoting their new cauliflower crust. This is a cauliflower crust pizza with some veggies (onion and olives) and some meatballs for protein — is it as healthy as a home cooked meal? No. But it’s low carb, has protein and veggies, and it won’t throw off my goals or make me feel sick. Sometimes balance means finding a healthy way to order a pizza so you can finish your research and get to bed at a decent hour! #healthyeats #thatdoesntlooklikecauliflower #balance #lowcarbhealthyfat #ketofriendly #bodyafterbabies #cauliflowercrust #glutenfreeliving #fuelyourbodyright #youcandothis
Someone is practicing to be a stunt man lol. Love how much the boys love getting involved in my workouts! #teachthemyoung #activefamily #activekids #moveeveryday #familyfitnessfun #littlestuntmaninthemaking #noididntreallyknockhimover #hetotallystagedthis
I’ve tried a lot of keto recipes lately, but so far nothing has been as good as the simplicity of pairing a protein, a green veggie, and a healthy fat. Simplicity always wins! #simplehealthymeals #lowcarbhealthyfat #ketofriendly #glutenfreeliving #healingwithfood #lowcarblifestyle #healthyeats #bodyafterbabies #eatrealfood #paleoish #grainfree #crazyfitmommy