It’s been way too long since I’ve written a post! I finished up my long-term sub post last Friday, so I’ve been catching up on laundry and all the other things I’ve let slide a bit while I was working full-time again. It feels really weird to be back at home again, and for some reason it feels like I don’t get moving as easily now that I’m not working again. Weird that I’d be more productive when I’m not home most of the day, but I’m sure it’s just because working with kids all day put me in a weird stressed/hyper state that I had trouble letting go of. My poor husband must have thought I was crazy lol, because he kept pointing out that I talk WAY too loud and I just don’t stop moving after work. Third graders are super loud and apparently I was taking the volume home with me. 😛

There’s definitely been some super crazy this week, but rather than complaining about how many times I’ve scrubbed something that should be in a diaper out of my carpet, I’m going to smile and link up with Heather and Andrea for some Friday favorites! 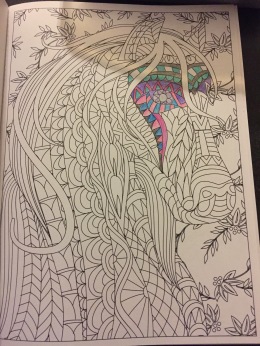 I feel a little silly about this, but these are so stinking awesome! I’ve wanted to buy one for a while, but I always felt stupid spending $10 on a coloring book because I’m an adult lol — I buy my kids’ coloring books at the dollar store or Walmart so ten bucks to color seems silly to me.

This week at Bunco this was one of the prizes (plus 72 colored pencils!!), and one of the winners gave his to me because he’s not big on coloring. I seriously went home and started coloring in bed instead of sleeping, and it was so much more relaxing than I thought it would be!

I feel a little silly saying that, but it’s still true. Substitutes don’t get paid a ton, and it was nice to know that people noticed how hard I was trying to do everything a certified teacher would do in my place. On my last day I was “knighted” in front of all my students (their mascot is the Knight), given flowers, a plaque signed by all the teachers, and a ton of adorable letters and presents from my kids. I didn’t cry, but it was REALLY close. Their new teacher is going to be great — she was helping in class all week to get to know them and they all loved her — so that makes it easier on me to know they’ll be well taken care of. The entire staff was so amazing and helpful to me, and it was really special to know they think I did a good job.

Maybe I’m totally lame, but I love a capella and I love Star Wars so this video made me really happy. I used to direct an a capella group in college, so I super nerd-out to this sort of thing… 😛

I don’t think I need to say anything else lol — I checked on them after bedtime and found them curled up together by the door. Totally melted my heart — can they never grow up please??

I have to admit this is a little love/hate because it’s super hard to go back to sleep when they do this, but I still love the cuddles. Sometimes Daddy getting up for work wakes them up, and this is the only way Mommy gets to go back to sleep. I usually just get up and work around the house while the kids are sleeping, but it’s easy to blow off laundry and dishes for snuggles and a nap. 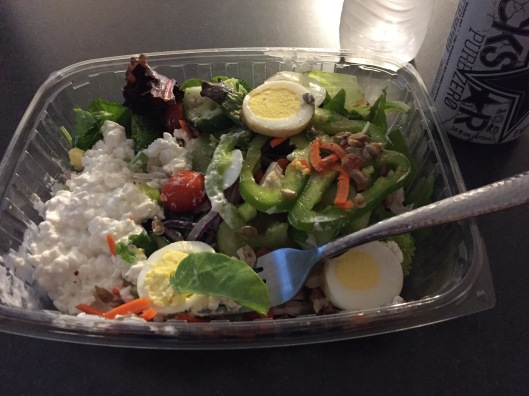 I don’t get these often because they’re a little pricey, but when you’re stuck out and you need a healthy option these are amazing. I messed up on timing out cooking before Bunco and I had to run out anyway, so I grabbed these for the hubby and me and they were so yummy!

When the hubby grills

Seriously, I’ve never met anyone else who always makes steak taste so good. One of the (many) reasons I’m lucky I get to keep him around! 🙂

Soooooo many toys! I’ll talk about this more later because I haven’t had a chance to do after pics yet, but two of those buckets are now empty and two big diaper boxes of toys are headed to Goodwill in the morning. I’ve been trying to organize based on toy type (one box for cars, one for balls, one for stuffed animals…you get the idea), but with the exception of blocks and trains I’ve actually stopped doing that for several reasons. First off, I was losing my mind trying to get the last few toys to fit into a category that made sense. And secondly, my husband noted that it’s kind of silly to put the kids in a position where they’re stuck with only one kind of toy (because the point of the buckets is so that they can pick just one so I have an easier time cleaning up after them). So after spending more than an hour getting them all perfectly organized, I mixed them all up and called it a day. Hopefully this keeps me sane, keeps them entertained, and provides the right kind of environment for real creativity. I’ll let you know how it turns out and if I change anything up!

Workout Wednesday and reorganization insanity — After more reorganizing today, it was nice to look back and see how really far this room has come (even if I don’t think I’ll ever feel like it’s really done lol).

Birthday Blues — with Micah’s 3rd birthday just around the corner, this was especially poignant for me today…

Day in the Life — It’s crazy how different my life is now — I’m going to have to do another one of these soon!