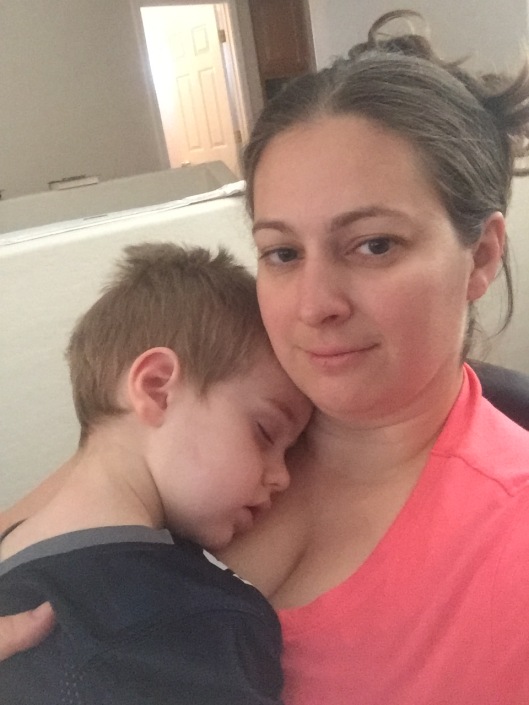 I don’t think I’ve mentioned this, but last week we decided to take Micah to an allergist to see if an allergy could be causing his night terrors. Long story short, maybe — turns out he’s allergic to dogs and cats, and we have 2 dogs. We don’t have to get rid of them, but I’m re-washing pretty much everything in the house, vacuuming constantly, and washing the dogs all the time, and he’s taking some allergy meds. He’d actually been sleeping MUCH better since starting the meds (and not letting him sleep with the dogs), but on Sunday he had a really rough night, and woke up around 5 am. Turns out all of our swimming excursions were too much for him, because he has swimmers ear. The worst part is that we already had a swimming play date planned for Monday, and he was absolutely devastated that he wasn’t allowed to go.

We had trouble getting an appointment, so we wound up stuck in the valley for a few hours before being able to hit the pediatrician’s office. I let Micah pick where to get lunch, and he picked one of the only places I can feed the three of us for under $10 — a Chinese buffet! He actually ate some veggies, pork, and lo mein, and I was really proud of him for being so adventurous (for him)!

After that we hit up the play place at the mall for some free, air-conditioned fun. I really loved watching the boys play together! Jonah is getting so daring, and Micah really tries to teach him to do new things. He would even wait at the top of the slide so he could go down next to Jonah! They can be a handful, but they’re so sweet and loving that it makes all the hard times so worth it. 🙂 Even though Micah’s ear was bothering him, he really had a good time. It was such a relief for him to be distracted from being uncomfortable, I felt so helpless not being able to do anything until he could see the doctor.

An odd but sweet side note — a little girl who couldn’t have been more than 8 gave this to me and told me it was for my kids. It was broken, but it was the sweetest gesture!

Of course, Micah had to be wrestled into his car seat lol — he always insists on jumping into Kinsey’s booster or the front seat and makes me chase him. He thinks it’s the FUNNEST. GAME. EVER!

Thankfully, after only one dose of the ear drops, he was already feeling better and slept really well. I’m actually starting to sleep through the night, and I’m not even sure what to do with myself! Really though, I’m just glad he’s doing better — I really hate it when one of my kiddos isn’t feeling well. Here’s to getting healthy and staying that way!

How was your weekend?

2 thoughts on “Weekend madness and a sick little boy”