Linking up with Meghan and Faith!

Last week was a pretty hard one for us, which is why I was MIA. My hubby had a work convention so he was gone all week, and we were all pretty lonely without him. He left the morning of the fourth, so we wound up watching fireworks with our friends (my friend’s husband went with mine so they were lonely too).

Of course, my kiddos passed out fairly early, so I wound up staying in the guest room with the boys so I didn’t have to try to get two sleeping babies inside by myself. Ironically, they both woke up not long after I went to bed, and I was up until 6 or so. It’s a good thing they’re so cute!

Living where we do, fireworks are (mostly) legal and easy to get, so a lot of people were putting on their own fireworks show in the neighborhood. We were able to sit outside and basically have a private show, which was kind of awesome 🙂 Unfortunately, the lack of sleep combined with the poor air quality after all this meant far too many breathing treatments for Micah the next two days.

He’s a good sharer though — some nebulizer for him, and some for Octonauts!

He also climbed the baby gate and snuck into bed with me almost every night that Danny was gone. Love waking up to this face, but I wish the poor kiddo was a better sleeper. It can’t be healthy for him to wake up so often, and my body is very much not appreciating it either. 😦 We’ve tried a lot of different solutions, so this week I’m going to get him scheduled for allergy testing to see if he has a food sensitivity that could be affecting his sleep. I almost hope the tests are positive for something, because at least that means I can do something to fix it… 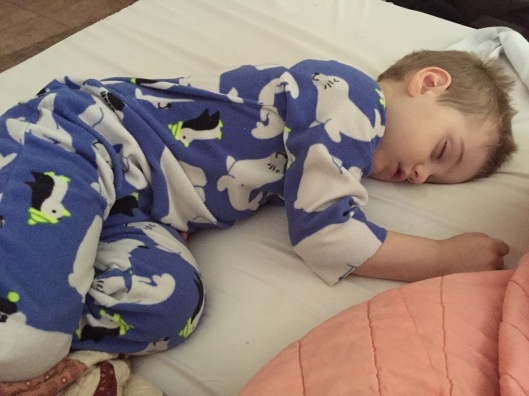 I tried to keep the week as fun as possible since the boys were really missing their Daddy, so on Wednesday I decided to grab the gift card that’s been in my purse for months and take them on a date. I was so proud of them, because they were so well-behaved! 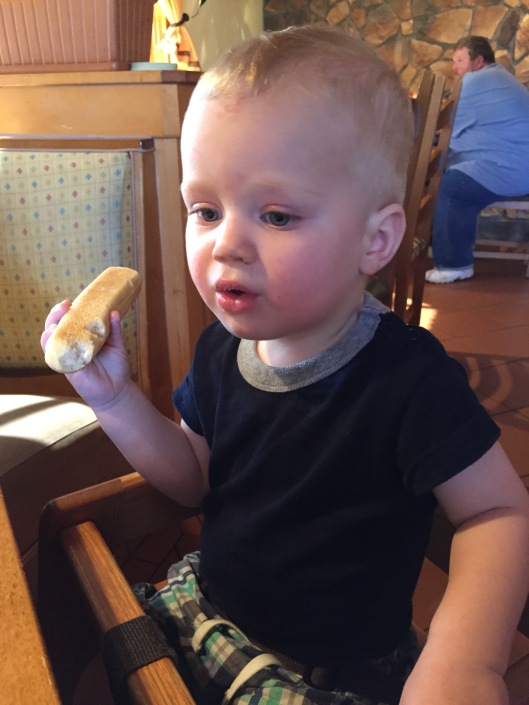 Jonah didn’t get upset with being in the high chair, and he mostly fed himself without making (much of) a mess! 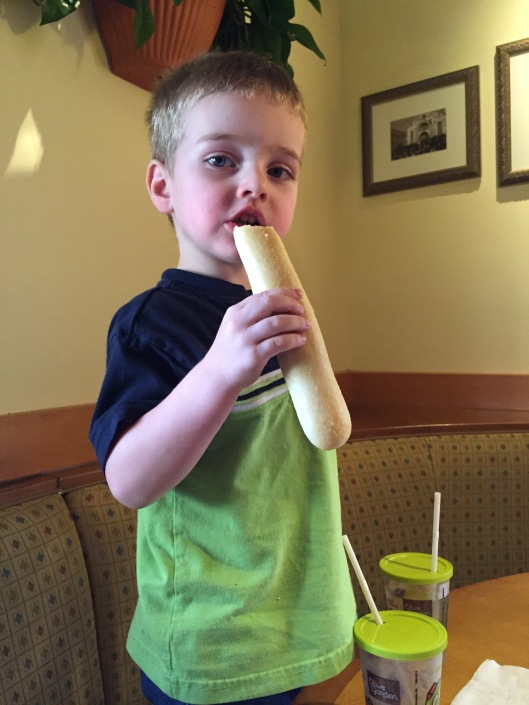 Micah sat next to me in the booth, and stood up to feed himself because he’s way too much of a big boy to accept my help 😛

The stickers in the kid’s menu were a HUGE hit!

And the kid’s meal portions were a little ridiculous, but they nearly finished them anyway.

Somehow he didn’t get mac and cheese all over his clothes, which was a refreshing change.

I wasn’t crazy hungry so I went for a light lunch, just some salad and a chicken piadina.

I’d never heard of these before, and even though these aren’t even remotely paleo it was nice to have an option that didn’t involve mountains of pasta. I love pasta, but it’s just not worth how crappy it makes me feel anymore.

Micah found the little table computer, and decided to try the trivia game. No idea how he figured out where to find the games lol, but he played over and over again.

The funniest part is that he actually won a couple of times just by pressing random buttons.

I had to take some pictures for the hubby, because it was just too funny.

With the sleeping issues going on last week I hadn’t accomplished any of the cleaning/reorganizing I wanted to get done while the hubby was gone, so Thursday night I made a huge list of everything I needed to get done before he got home on Friday and went to bed a little early. Of course the hubby kept texting, so I sent him a copy of my to do list  and let him know my alarm was set for 4 am.

Because he’s a huge stinker, he kept texting right up until the minute he walked into our bedroom and scared the heck out of me! The convention had gotten done early, so they decided to drive home and surprise us 🙂 He was really excited about everything, and we wound up staying up and talking until my alarm went off…so we slept in and I got exactly zero things on my list done. I hung a few loads of laundry, but I didn’t come close to finishing.

On Saturday I got everyone up early and headed over to the in-law’s house, where Danny’s sister was waiting to surprise him for his birthday. After a really nice brunch, we headed out to Kinsey’s cousin’s birthday party. The highlight of the party was definitely the 20 foot inflatable double water slide, and even the adults got in on the fun. Jonah rode on my lap twice, but totally hated it so he and I dried off and stayed inside for the rest of the party. I wish I’d gotten some pictures, but there was so much water flying around that I couldn’t bring my camera outside. #bloggerfail

After the party there was another surprise for Danny — NERF WAR! 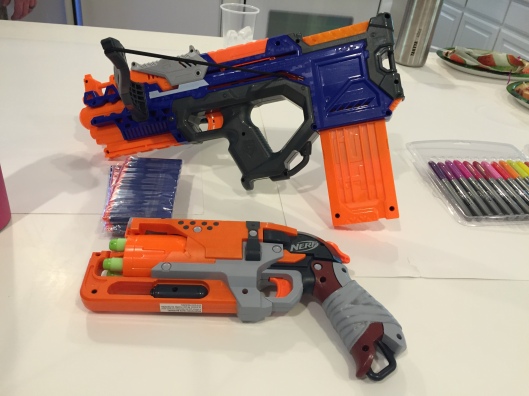 Part of his birthday present was a Nerf gun, and it turned out that his sister’s in-laws were having a huge fight and we were invited! These were my guns — that crossbow was awesome! 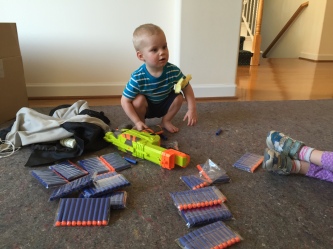 The kids also had guns, and Kinsey helped Micah figure out how to use his before the fight started. It was too cute! 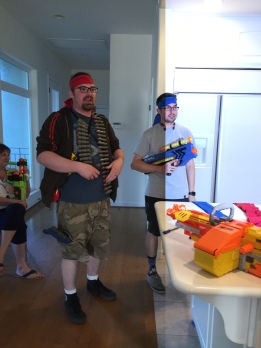 My in-laws take their Nerf guns pretty seriously….yes that’s a belt fed Nerf gun around my brother-in-law’s neck! I didn’t even know they made those.

The kids took it pretty seriously too 😛 Kinsey was old enough to be on my team, but Micah was given a yellow armband — basically you can’t shoot him, but if he shoots you you’re still dead. He was a crazy little assassin, and he loved getting to run around like a crazy person. This house is about to go on the market, so it was completely empty — no furniture, no personal things, so nothing for him to get into trouble with. 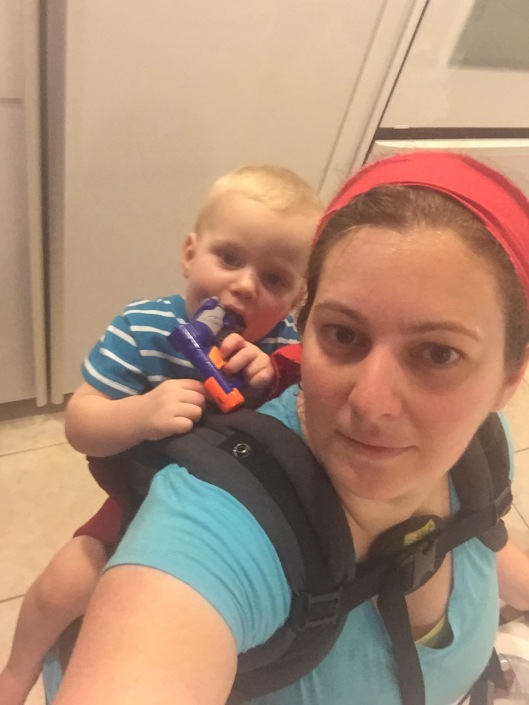 After the first round Jonah was pretty upset with me moving more than an inch away from him, so I borrowed a carrier and he was happy as a clam the rest of the time. Several bonuses — he was off-limits so it made it harder to hit me, the carrier had straps that I could attach my guns to for easier switching and reloading, and his extra 30 pounds made it a real workout. He wasn’t much of a sniper though lol, he just chewed on his gun most of the night.

It’s a little blurry, but Micah stealing someone’s big gun and coming after me was such an adorably epic betrayal that I had to share anyway. 😛 It was a super fun night, and the kids slept better than they have in a while, especially Micah.

Today is Danny’s actual birthday, so we’re going to see a movie in a little bit, grill some steaks, and maybe have some ice cream later. I’m supposed to make him pie, so we’ll see if I wind up having time for that. Kinsey loves to cook with me, so it would be a fun project for the two of us while the boys nap. Who says Monday’s have to be terrible!

Do you have any fun plans this week?

What do you do to stay sane when your significant other is out-of-town?

5 thoughts on “Beating the heat with weekend fun!”