Once every couple of weeks we start out our weekend (which starts on Thursday for us because that’s when Kinsey comes home) with a trip to Dunkin Donuts as a treat for the kiddos. We usually get a medium box of munchkins, but this week the hubby was smart enough to have them put into three separate bags. It’s amazing how everyone having their own bag completely eliminated fighting and crying, and my ears were super grateful 🙂

Of course, Kinsey had to check out Daddy’s new office now that it’s mostly set up, and she and Micah snuck the kick pads out of the closet and had some fun. Micah ran around yelling “sandwich!” for hours after this…

I don’t think I’ve mentioned it, but my hubby is working on opening a martial arts school in our area, and he was super excited to get his new business cards this weekend!

I think they look awesome, and he was super excited too. He’ll be headed to a martial arts convention soon, so he was excited that his cards and shirts were finished in plenty of time. Also, shameless plug — he’s started his own blog and Facebook page if you’re interested in that sort of thing!

On Friday we got together with some friends to light some fireworks, since neither of us will be able to do it on the fourth. The kiddos sat on the curb while the dads took care of everything, and it was a pretty good show for what we spent.

The tanks cracked me up. They spit fire out the front and back, and then actually appeared to fire at each other! They were super cheap, so I was pleasantly surprised with how cool they were. 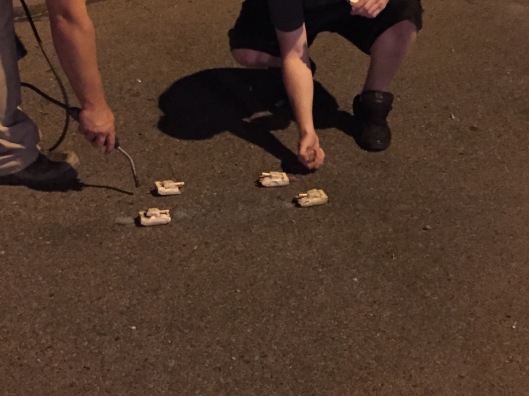 Of course, my hubby’s tanks won because he’s awesome! 😛

There was also a lot of fun with colored smoke bombs and these colored, spinning fireworks. It’s not super impressive, but the kids were mesmerized.

And of course, the finale, which most of the kids loved… 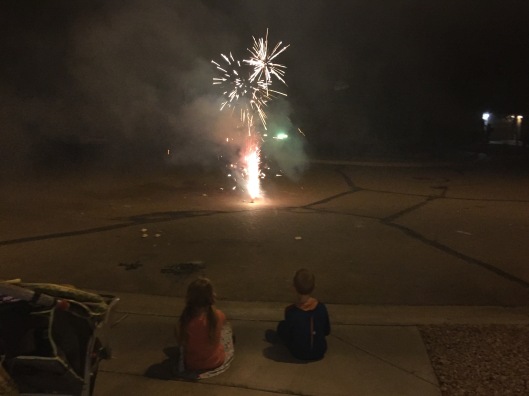 but actually made one of the kids cry because it made more noise than we realized.

It’s really nice to live in a state that lets us spend $20 on cruddy fireworks and light them ourselves. It’s so much easier than carting toddlers to a football field on the fourth, paying a ton of money to get in and for food, making 50 trips to the port-o-potty with my “mostly” potty trained toddler, spending hours trying to entertain the kiddos, then waiting an hour to leave after a mere 15 minutes of fireworks. Maybe we’ll get lucky and see the fireworks from home, because until they’re older this is going to be our routine.

Today we decided to hit the splash pad to give the hubby time to get some things organized for his trip. Kinsey is so adorable, I swear she’d grow fins and never leave the water if she could! 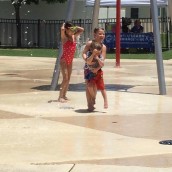 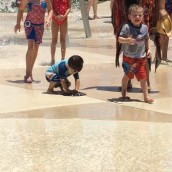 Of course she wants her brothers to love the water as much as she does, so she decided to carry Micah under the big bucket of water without telling him he was about to get soaked…then she accidentally turned him so a water spout sprayed him directly in the face. In case it wasn’t obvious, he was NOT amused, and came running to tell on her right away. 😛

but he might have actually been less amused than Micah. He is warming up to water a little though, which really makes me happy. He actually ran over to a spout and stuck his hand in it, which is a ridiculous amount of progress for him — he REALLY hates water 😦

We brought sandwiches and some fruit along, but the boys decided what they really wanted was my veggie smoothie. It cracks me up, because they both turn their noses up at broccoli and spinach, but all that was in the smoothie was spinach, kale, broccoli, cauliflower, carrots, a scoop of a green drink powder, and some strawberry kefir. I thought they’d spit it out once they tasted it, but they drank more than half of it! Always feels good to get them to eat something healthy without threats or bribes!

When we got home I put the boys down for a nap, and Kinsey and I finally had the chance for some girl time. I didn’t have any white nail polish, so we just did matching blue and red in honor of Independence Day. Having boys is fun, but there’s something about pampering my little princess that’s so incredibly special to me. Maybe it’s because it’s the sort of thing I used to do with my mom and my sisters…

I’m not a great nail artist, but it’s still fun to paint nails together! One of these days I’m going to surprise her with a mani-pedi, I think she’d love it! Plus her nails will look way better afterwards lol…

Do you have any fun plans for the fourth of July?