Last weekend was definitely interesting. It started with a ton of fun and ended with a bit of drama, but overall it was great! Of course, the drama made it hard to post last week so I took a few days off, but its good to be back.

We started with a trunk or treat with our church — it was a week early, but since its not our year to have Kins for Halloween it worked out perfectly.

and Elsa all made an appearance!

The Hulk even made an appearance, and even though I didn’t really dress up, I decided to go with the superhero theme and match Micah. 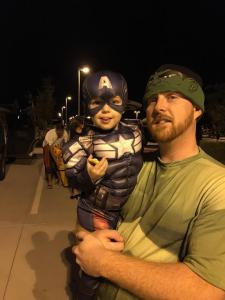 Then on Saturday, we ran our first 5k since I was pregnant with Micah! 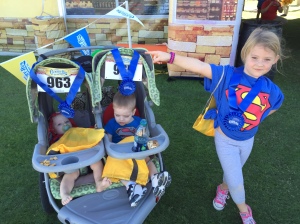 Kinsey was super proud of her finishers medal, and she asked if we could have a race once a week. 😛 I’ll be posting a review of the race soon — I really enjoyed it, and I think we’ll be doing it again next year!

On Sunday we got to see Kinsey and the other children perform at the Primary Program at church, and it was beautiful. The kids range from 3-11 years old, and they spend the entire year learning songs for the program. They also bear testimony about Heavenly Father, Jesus, and different gospel principles, and its so amazing to hear how much faith these children have. Always an uplifting day!

Of course, this is where the drama stepped in. Right before bedtime, Micah decided to jump off the edge of the trampoline, which sits about 18 inches off the ground, and land on his knees. Of course, that was excruciating, and based on his reaction I was really afraid he’d broken something. We calmed him down and inspected his knees, legs, and feet, but as long as he didn’t see what we were doing it didn’t bother him at all. He was also able to walk with no problem so we decided he was just bruised, gave him some Tylenol, and put him to bed.

He woke up multiple times in the middle of the night, and I wound up pulling him into bed with us. This really worried me, because he’s NEVER been still enough to actually sleep in our bed before. We got up early to take Kinsey to school, and I noticed that Micah was limping pretty badly. Now mildly panicked, I called the pediatrician and he agreed to see Micah that day. Despite the bad limp, he still didn’t have any tenderness at all when the doctor examined him, so we went home with instructions to watch him closely and come back if he wasn’t better within a week.

The next few nights were the same — Micah limped all day but seemed fine, but then cried all night. In my seriously zombified state I barely got my homework done and had serious trouble staying awake for work, so blogging took a backseat. I got in a few midday naps thankfully, and by Thursday Micah was walking normally again. Such a relief!

The timing was perfect, because we had a Halloween skating party that night with my father-in-law’s school, and all the kids had a great time! I wish I’d gotten more pictures, but the lighting was bad, the kids never stopped moving, and I was on skates too so I couldn’t hold the camera straight. I got a few videos on Instagram, but this is just about the only still I got. #bloggerfail 😦 Kinsey was getting really good at skating on her own and much less afraid of falling, and Micah did really well for his first time. That boy is fearless! Jonah was a little bored, but by next year he’ll be ready for his first pair of skates too. 🙂

The rest of the weekend was pretty low-key. We had another trunk or treat with Kinsey’s gymnastics friends and she went as Evie from the Descendants, a made for TV Disney movie that she’s completely obsessed with. They had a haunted house and a little dance party, and Kinsey was going crazy. I love watching her dance! We took the boys out trick or treating on Halloween for a little bit, but by this point they’d been wearing their costumes on and off for a week and they were kind of over it. That worked well for us, because the last thing we need in the house right now is a ton of candy — the less the better!

Do you have any yearly traditions for Halloween? How did you celebrate this year?