In the four years that the hubby and I have been together we’ve never done anything special for his birthday. The summer is when money tends to be tightest (summers in Arizona mean very expensive electric bills) so we rarely have extra money for trips or extravagant gifts and I’ve always felt bad about it. This year the hubby decided to do a bunch of overtime and reserve a cabin for his birthday, so we tried to pack 4 years of birthday celebration into one weekend.

We even persuaded our friends to come, and that made the whole trip a million times more fun!

After we got unpacked, we set up our karaoke equipment near the pool table and spent some time exploring the property.

…but the view from the deck above it took the cake. Living in Arizona for 13 years has put me in a constant state of greenery withdrawal, so being surrounded by a pine forest makes me happy in ways I can’t even explain.

The first day we kept things pretty low-key. We watched the kids play on the deck… 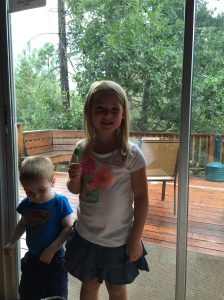 …and grilled hamburgers and hot dogs for dinner. Super yummy!

After dinner the kids watched a movie and the adults decided to sing some karaoke. I wish I’d gotten more pictures of that but Micah was having a rough night so I was a little bit distracted. Once the movie was done we put the kiddos to bed and headed upstairs for some games. We were all tired so we played a few rounds of Texas Hold’em and called it an early night. We all wound up bankrupt pretty quickly — when you’re playing with Skittles your money tends to run out even if you’re winning. 😛

We were woken up unexpectedly around 3 am by…a bat!! I really wish I’d gotten pictures of this incident, but it was pretty scary at the time. One of our friends had gotten up to go to the bathroom and the bat flew right by his face! Naturally, he called us for reinforcements right away. We were sleeping in a loft above the kitchen so the bat was starting to fly closer and closer to us as it circled around the kitchen — I was super freaked out! I pulled Jonah out of the crib and hid us under a pillow and sent the hubby to meet up with our friend to figure out how to get the bat back outside.

If I wasn’t stressing about it landing on my infant it would have been hilarious. The hubby was armed with a pillow and our friend was armed with…a windbreaker! It’s funny what makes perfect sense at 3 am. After accidentally trapping it in the light (with the ceiling fan) they were able to get the back door open, and thankfully the bat found its way out really quickly. We were super shaky, but we couldn’t help but giggle at how ridiculous we all must have looked.

After our late night we had a pretty lazy morning, but we decided to stretch our legs and explore after lunch. It was so gorgeous, and the cool weather was such an amazing break from the temperatures in Phoenix!

It was a good thing we didn’t go too far though, because after about 15 minutes the sky just opened up. If we didn’t have the kids with us it would have been awesome to keep hiking, but there were 6 kids with us (3 of them under 2 years old) so we started running back towards the cabin.

Micah and Kinsey were thoroughly amused. After a few minutes we realized the babies were getting soaked, so we hid under a tree and sent the hubbies to get a car so we could get the kids back inside.

The trees didn’t provide as much cover as we thought, but thankfully the guys made it back in about 3 minutes. All the kiddos got warm baths and dry clothes, and then we watched the rain from the living room — I love Arizona rain storms. So pretty! 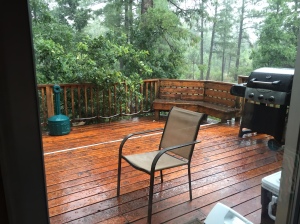 The guys even got a fire started, and it made the cabin really cozy all night.

The whole weekend was great, and we were really sad to pack up and leave the next morning.

The weather was cloudy and amazing as we left, which made it even harder to head back towards the desert…I swear once we’re retired we’re going to be snow birds.

It was only a two-hour trip home, so thankfully the kids were able to keep each other entertained. We had a huge bag of toys for the car ride but they barely used anything in it. The crayons were a huge hit though! 🙂 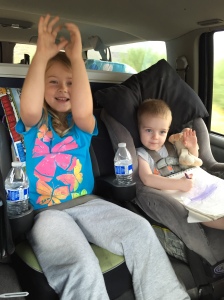 We’ve decided to make the cabin trip a yearly tradition, and I’m so excited to start planning next year’s trip! Hopefully we’ll get to drag our friends along again, because we had so much more fun with them there!!

Do you have any summer traditions?

What did you do for summer vacation this year?