I try to keep it simple when it comes to baby items. I’ve never had a changing table (that’s what the carpet is for), wipe warmers, fancy bottle racks, or any number of other things. With two kids under 2 years old, I feel like we’re drowning in baby stuff as it is, so I’ve made a real effort to find our favorite items and ditch what doesn’t work.

The Boppy has been an absolute lifesaver with Jonah, which is funny because I don’t think I used it at all with Micah. I use it to prop him up when breastfeeding, but I also let him relax in it while I work or play with Micah. Jonah is a super gassy baby so he does a lot better laying at an incline than he does flat on his back. *A word of caution — babies shouldn’t be left alone while laying in a Boppy like this. They can slide down and put their head/neck in a position that makes it hard to breathe. Quick side note — is that not the cutest onesie you’ve ever seen? My sister wanted me to pair it with a mustache binkie but he grew out of it before I found one 😦 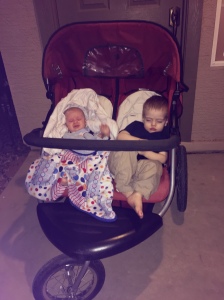 I know I’ve raved about the regular double stroller I’ve been using since Jonah was born (and I still really like that one), but I found an InStep double jogging stroller at a yard sale and it is AMAZING to actually use a jogging stroller for our evening walks! It’s so much lighter and easier to steer, and it has a better sun shade and more storage. The only negative is that it doesn’t fit in the back of our SUV without folding down the third seat, so we’ll be keeping the other stroller for travelling, and using this one for my workouts. 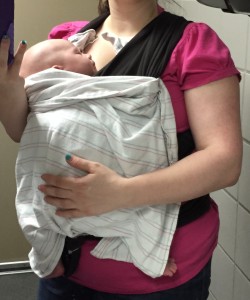 I had a wrap that I used occasionally with Micah, but I mostly either carried him or left him in his car seat anytime we went out. This time around we opted for convertible car seats, so having a good carrier is the only thing that makes it possible for me to go anywhere with both Micah and Jonah. I’ve never used a wrap holder before, but I found this one at a yard sale as well and decided to give it a try. There was a bit of a learning curve, but after getting used to it I’m really starting to like it. The biggest negative for me is that I haven’t figured out how to get it on me without dragging it all over the ground, so I usually put it on at home and just don’t take it off until we’re back home. Not a huge deal but it gets a bit sweaty in Arizona when you’re wearing extra layers. 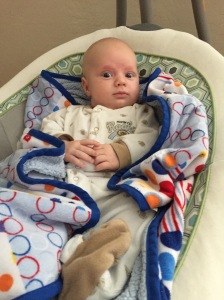 This is by far the most helpful baby gift we received for any of our kids. For at least the first 4 weeks Jonah refused to sleep more than 30 minutes at a time unless he was swaddled and in this swing, so it has been an absolute lifesaver for me. It was just as amazing with Micah, and if we ever decide to have another baby you can bet this swing will be back in our bedroom. It also comes apart and can be used as a vibrating bouncer, which will be useful until Jonah can sit up by himself. You may have noticed that I usually shop secondhand for baby gear, but if something happened to this one I would have no problem shelling out the money to replace it–worth every penny!

Because I worked full-time when Micah was nursing I used this a lot more with him, but it’s still very useful. I’ve been blessed to produce more milk than Jonah eats (and this little chunker eats a TON), so pumping really helps when he’s not hungry and I’m engorged. I’m also working on building up a large freezer supply of milk for emergencies, so I’m trying to start pumping after more feedings. With Micah I had to stop breastfeeding at 7 months because of supply issues, so it makes me happy to know that if the same thing were to happen with Jonah I’d be able to keep supplying breast milk for at least a little while longer. Good for him AND our wallets — I was blown away by how much we spent on formula with Micah, even using the cheap Costco brand.

What baby items could you not live without? What items did you find to be superfluous?