Easter is one of my favorite holidays. There’s just something so adorable about picking out a pretty pink dress for my 5-year-old to wear to church… 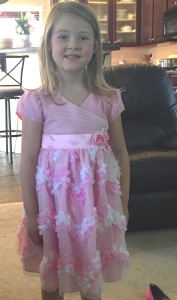 and leaving carrots out for the Easter Bunny to eat. It’s simpler than Christmas because kids get mostly treats (so they’re not expecting a dozen presents), and Easter decorations are so much easier to put out (no untangling 20 strands of lights just to put up the tree!). All of that coupled with the fact that we’re celebrating Jesus being resurrected, and there’s nothing not to like!

This year I had planned a fairly simple holiday. The hubby had to work a double, it’s not our year to have Kinsey for holiday, and the boys are way to young to have any idea what day it was — plus the Easter Bunny is not going to come for the boys before he comes for Kinsey, she would be devastated. This Easter fell on the same weekend as General Conference (basically a weekend where the LDS church leadership teach members worldwide about scripture), so I figured the boys and I would lounge around the house, watch the broadcast, workout, and maybe clean a little. My awesome friends heard about this plan and decided I couldn’t be allowed to spend Easter alone — so my plan remained basically the same, it just moved to their house.

Jonah apparently decided I needed a break, because he slept 6 hours in a row for the first time the night before Easter, and Micah didn’t wake me up until about 8 am. Sleeping in was GLORIOUS! I got everyone ready and decided to throw the kids in the stroller and walk to my friend’s house. I knew if I saved my workout until later there was a good chance it would never happen, plus my double stroller is awesome and made carrying a day’s worth of diapers, wipes, and extra clothes super easy! I took it a bit easy, but I did 1.31 miles in 29 minutes, and I even jogged for part of it. It’s the first time I’ve run since giving birth, so even if it wasn’t spectacular it felt great. I’m pretty behind on my goal for Marathon April, so I planned to walk home as well to try to catch up to where I should be so far. Thankfully, Jonah didn’t object and Micah rarely does.

The rest of the day proceeded uneventfully. Good food, good company, Conference was good…just a nice, low-key day. Sadly, that ended around 5 pm, when Micah started having terrible diarrhea. I don’t know if it burned or if he had stomach cramps, but he was just miserable. I had to give him a bath every time he pooped (which was a lot — I owe my poor friends a serious bathtub bleaching!) because his bottom was getting raw from being cleaned too often. The baths cheered him up and seemed to make him feel better, and after a while I decided the worst was over.

I. WAS. WRONG. Soooooo wrong. Micah started playing again, and acting completely normal. Then while I was feeding the baby, he randomly threw up all over my friend’s beautiful beige carpet. Thankfully I was finishing up, so I was able to put the baby down and get him in the tub pretty quickly, but everything deteriorated from there. Poor kiddo couldn’t keep anything down, and he still had diarrhea. I spent the rest of the night running him back and forth to the bathroom and giving him frequent baths. Of course, walking home was out of the question with him so sick, so my husband stopped to pick us up on his way home from work. By then Micah seemed to be improving — he was still miserable while he was throwing up, but he was his usual smiling self afterwards.

We pulled his mattress into my room so I could hear him if he needed to throw up, but thankfully there was only one more episode. He was able to eat some ice chips and go back to sleep without vomiting again, and it was such a relief that he could finally hold down water! It can be so dangerous for young kids to have stomach issues because they get dehydrated easily, so keeping fluids down is really the only way to stay out of the hospital. He actually slept until about 11 am, and even though it was obvious he didn’t feel well, he was a million times better. Of course, a sick toddler means nothing gets done, so I spent the day cuddling my poor baby. It was like having two newborns instead of one — they both woke up long enough to drink, then went right back to sleep. We alternated between water, Pedialyte, and pumped milk — I had extra and figured he could use the extra boost to his immune system. 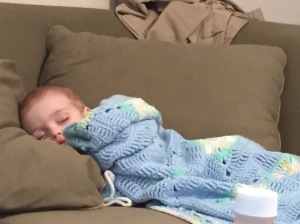 I was hoping he’d feel up to a walk around sunset, but he was sleeping again and there was no way I was going to risk waking him up to put him in the stroller. Instead, I knocked out T25 Ab Intervals while he woke up and watched from the couch. Towards the end he got down and tried to climb onto my back while I was doing planks so he was obviously feeling better. I was so relieved to see him playing and being silly again! I’m a bit of a helicopter mom, so I go pretty crazy when my kids are sick. I’m letting him sleep in my room again tonight just in case he regresses, but mostly because I want to be able to cuddle him if he wakes up. I start work at 6 am, so hopefully he still feels better then, or I’ll wind up taking the day off and probably heading to the pediatrician.

So Easter was a bit more eventful than I’d expected, but at least everyone seems to be (mostly) back to normal!

How did you celebrate Easter?

How are you doing with Marathon April?