We left off around the time I’d finally met the on call doctor who would be delivering my baby. My stress levels were pretty high but I was trying to stay calm, especially because I knew that stress would make my muscles tense, which would make the pain of the contractions worse. My husband did his best to keep my mind off things, and we kept walking as much as I could.

At this point, the contractions were starting to get a bit stronger — not so bad that I couldn’t breathe through them, but definitely strong enough that I had to concentrate to keep from tensing up my entire body. It was about this time that the nurse came in and wanted to monitor the baby for a few minutes. According to my birth plan, after the initial monitoring (with those annoying belts) I was only supposed to be monitored intermittently with a Doppler, but she told me she’d forgotten to print out a continuous strip of the baby’s heart rate when we’d first gotten there and would have to re-do it. I wasn’t happy about being tied to the bed for another 15 minutes, but I didn’t see a choice so I didn’t object.

After about 30 minutes, I was still on the monitor and really had to use the restroom, which made getting through contractions REALLY difficult. I hit the call button to get someone to take me off the monitor to use the restroom, and half the nursing staff and the doctor immediately descended on my room. According to them, the baby’s heart rate was dropping during contractions and they were concerned. I, on the other hand, was not concerned at all, mostly because I’d been fidgeting like crazy and accidentally moved the belts on several occasions during that time. I was told I had to stay on the monitor, and I wasn’t allowed to get up to go to the bathroom until they decided the baby was OK. They also told me they were going to start IV fluids (I had agreed to a saline lock, but not to any fluids), and that was the last straw for me. I refused the fluids and launched a hysterical tirade at the nurse and doctor letting them know how upset I was to be on the monitor (because I felt like they had ignored my birth plan), that I was obviously doing fine on oral fluids since I had to pee every ten minutes, that there was no way I was even going to drink another drop of water until I could go pee….I went on for what seemed like a pretty long time.

Now, I just want to pause briefly and point out that I don’t actually advocate verbally abusing nurses and doctors when I disagree with them, especially not when they’re trying to do what they think is best for my baby. I don’t feel bad for disagreeing with them, but I do think my hysterics may have gone a little overboard. Luckily, they’re used to dealing with seriously emotional women in labor, and didn’t take it personally…

When I was done ranting at them, they agreed that if they could see the baby’s heart stabilized and normal for ten continuous minutes, then I could get off the monitor and go to the bathroom. I’ve never felt more like a child in my life than in that moment, doing the bedridden equivalent of the pee dance while I waited for permission to use the toilet. I stayed as still as I possibly could to avoid moving the monitor, and in ten minutes I was rewarded with a glorious trip to the bathroom!

I have to admit that at this point I was starting to doubt just about everything, from my choice of hospitals to my ability to make it through labor with my sanity intact — having control of the process taken away from me had really shaken my confidence. My husband really helped me focus (and stop being a sobbing mess) but I was still really upset. By this time it was after 7 pm and we’d been in the hospital around 5-6 hours with what seemed like minimal progress, and with each visit I could see the doctor was getting antsy that I had obviously not hit transition yet.

A quick sidebar for anyone unfamiliar with the basic checkpoints during labor — early labor is relatively easy with minimal discomfort (usually up to 3 or 4 cm dilated); then between 4 and 7 cm, the contractions are enough to require concentration but not necessarily completely sideline you (although the closer you get to 7 cm, the less you’ll be able to do during contractions); and the between 7 and 10 cm, which is commonly referred to as “transition”. This is something I read about when I was researching the Bradley Method, and based both on what I’d read and my experience with my first pregnancy, this was the portion of labor that I was most concerned about getting through. During transition your body is making the final push to be ready to deliver the baby, which means very strong contractions very close together. This is the point when many women break down and request pain medication, because if transition lasts a few hours it can be pretty close to unbearable. According to the Bradley books, this is the point when most women start to panic and verbalize that they can’t take any more. From my own past experience, this is absolutely true — in transition every contraction feels like you’ve hit that pain threshold where you just can’t physically take anymore.

Despite the doctor’s concerns, we kept laboring in our room and tried to relax and not to think about the time. I was able to eat a few bites of a plain turkey sandwich, which really helped my concentration and energy levels. I’d only been able to keep down Clif Shot Bloks before then, and while those got me through the day it was really nice to have a little bit of solid food in my stomach. Just before 8pm, I noticed the contractions were starting to get worse again, and after an exam the nurse let me know that I was between 5 and 6 cm dilated. I requested that she start to fill the birthing tub at that time, and she let me know it would take about an hour to be ready. Almost immediately, the contractions worsened exponentially, to the point that I couldn’t move or talk during them anymore. My husband put on some music to help distract me, and held my hand as he tried to help me relax and breathe through the contractions.

The next hour is mostly a blur to me, but I remember hearing the nurse joke with my husband about the birthing tub — that nurse hadn’t had a single woman that made it into the tub since she started working at the hospital. Each one had delivered prior to the tub being fully filled, and I remember hearing them speculate about whether I would make it into the tub or not. I knew I must be going through transition, because it took everything in me to breathe through each contraction and I kept asking myself why in the world I was willing to go through this without drugs (thankfully I didn’t give in!).

Though the considerable mental fog, I remember being asked if I felt pressure or if I wanted to push, but the contractions were so strong I couldn’t even tell at that point. Because of how much pain I was in and how quickly the contractions got worse, they checked me one more time and realized I was already at 10 cm. The nurse called the doctor and started to set up the bed for delivery. I wasn’t very much help; for some reason I physically couldn’t roll off my side. Between my poor husband and the nurses, they were able to get me into a position where I could deliver, but even with the pain I wasn’t feeling much of an urge to push. I remember turning to my husband and telling him I was scared, even though at the time that seemed like a really strange thing to say. With the first push, the doctor became very concerned, and she told us that the baby’s heart-rate was dropping dangerously with the pushing. She said we needed to get the baby out right away or she was going to need to do a vacuum delivery to hurry things along. At that point I was terrified and I started pushing constantly, not stopping in between contractions except when I physically couldn’t continue. According to my husband, it was less than 3 minutes before the baby crowned and we got his head out, but it felt like an eternity. At that point I heard the doctor say that the cord was around the baby’s neck, and that he didn’t appear to be breathing. She unwrapped the cord and then told me to push as hard as I could. Unfortunately, the baby had shoulder dystocia, which basically means that his shoulders were too wide to fit through my pelvis. Two of the nurses jumped up on either side of the bed and pushed down on my abdomen as hard as they could with my next push, and somehow the baby came right out. I was so scared that something would be wrong with him, but after a quick look at him, the doctor handed me the baby without any further intervention. The poor thing was blue and bruised, but he was breathing and looked perfect. 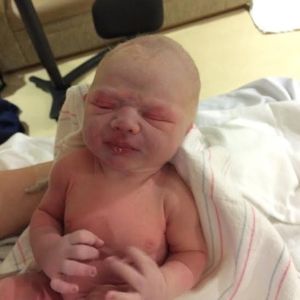 Once it became clear that everything was okay, the nurse pointed out that now that the baby was delivered, the birthing tub was ready for me to jump in. After such a bad scare, it felt really good to laugh! We cuddled the baby and discussed his name for about an hour and a half, and finally around 11 pm we decided on Jonah. 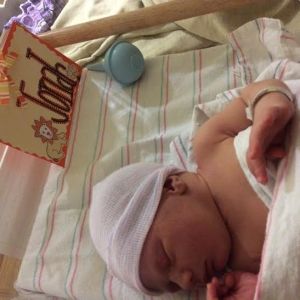 It was a bit of a scary delivery, but I feel so blessed and grateful that there were no real complications and everything was okay. It sounds cliche, but as long as my baby is healthy I’m happy!