It seems like this pregnancy is just flying by — February is practically right around the corner! We hit 25 weeks on Thursday and we just had another ultrasound, so I finally have some interesting pictures of him! He was super uncooperative the first time around — gender is pretty much the only thing they could see for sure, even his heart and limbs were hidden. 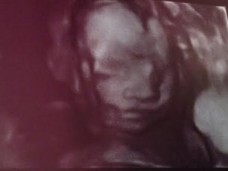 My little monkey is about the size of two stacked juice boxes now, about a pound and a half and about 13 1/2 inches long. His eyes are formed and his eyesight is improving, and his facial features are getting more defined. He’s also getting a stronger grip, and can be seen grabbing the umbilical cord (although I’m pretty sure he’s found a way to practice his grip on my bladder too!). His lungs and nostrils are also developing now, and he’s practicing breathing amniotic fluid to strengthen his lungs. His skin is also getting more pink because his blood vessels are forming under his skin. On a mildly icky note, his first poop is also formed already, and the poor guy will have to hold it in another 15 weeks!

In terms of changes for mom, there isn’t nearly as much going on. I feel pretty normal (even with this huge belly), and even though I’m tired often it’s not any worse than it was a month ago. I have been getting really bad heartburn lately, but the hubby propped up the head of our bed and that seems to be helping a bit. As much as I swore I wouldn’t, I’m carrying Tums in my purse now and popping them fairly often. I’ve been trying out different dietary changes to help as well, but the only thing that seems to help is cutting back on soda. I’ve been trying to do that anyway, but between work, school, the kids, and being pregnant, sometimes caffeine is the only thing keeping me on my feet. Hopefully as the weather gets cooler that will help — nothing like a cool breeze on your face to wake you up!

Workouts have been a bit sporadic since I’ve had a cold on and off since September, and mostly consisting of walking while pushing the stroller or chasing Baby Boy around the park. I’m planning on getting back to T25 and Insanity style workouts while I still can, but as long as I get a good walk in most days I’m not going to beat myself up. Until this month I had only gained 4 pounds during the pregnancy, but I just shot up 10 pounds in one month so I’m trying to be more active again. Of course , I need to gain weight and I’m not going to be neurotic about that, but I want to make sure I’m gaining healthy weight and not just extra fat. That would just make it harder to get through labor naturally and slow me down after the baby is born. Here’s hoping I can still manage pushups with this huge belly in the way! 🙂