It’s been a super long week, and I’m super excited to have spent so much of the weekend with my family! I get a bit down during the week because I don’t get much time with Baby Boy, and Big Sister stays with her mom until Thursday — I hate being away from my kids so much! Of course, we’re super lucky — even though I have to work for now we have an amazing babysitter and Baby Boy loves playing with her and her daughter, and Big Sister needs her mommy time too. I just love getting to spend entire days with them rather than the 3 hours after work and before bedtime — one more day!

This morning was Day 13 of Insanity and my body is definitely feeling it — I don’t think there’s any part of my body that’s not sore and exhausted. Monday is my next weigh in/Fit Test and I’m really excited to see how I’m doing! I love that Insanity has a way to track fitness as well as inches; when a plateau hits I’ll still be able to see progress rather than feeling discouraged. I can definitely use that kind of objective encouragement! 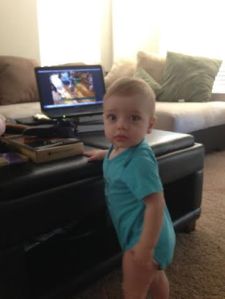 I do have to rant for just a moment though. My husband and my four year old eat fairly healthy but they aren’t even close to as strict as I’m trying to be, and it completely STINKS to make a yummy but mildly naughty dinner that you can’t eat (but want SOOOO badly!) and then have to eat something far less naughty yourself. I’ve never been a huge fan of the “cooking two dinners” thing, but I’m trying to eat a lot more veggies and a lot less dairy/wheat (I’m sensitive to them but can’t quite bring myself to eliminate them completely) so the hubby is quietly revolting about the recent menu changes. He won’t say anything negative, but he won’t really eat much and then he’ll break out the chips and salsa or ice cream right after dinner, and I just can’t make the poor guy go hungry anymore. As much as it stinks, it’s not fair to force him into my diet plan. It’s just so hard to stay on track when there’s always something I’m trying to avoid right in front of me. I’ve had the occasional slip up (nothing major, but I definitely lick the spoon too often when I cook), but I think I’m starting to get a little more numb to the unhealthy options. The harder I workout, the easier it gets — hopefully soon I won’t even give those foods a second thought!

Has anyone else had this problem? What strategies do you use to stay on track?