It’s been a complete whirlwind of a weekend — somehow we ran the whole weekend and yet I don’t feel like I accomplished anything. It started with Thursday — hubby had to work and our regular babysitter wasn’t available, so I wound up calling in sick and spending the day with Baby Boy and Big Sister. It was completely amazing to take some time away and do absolutely nothing besides spend time with them. I’ve been really sad and stressed lately about how much I’m missing in the kids’ lives by having to work, and I really needed to just unplug and spend some time with them. It doesn’t really help that my job is on shaky ground after my company was purchased by a large conglomerate, so I’m caught between hating my job and wanting to be a stay at home mom, and needing the money and stressing over whether I’ll have a job tomorrow. Kinda makes me feel like I have split personalities…

Friday morning I got up early and made the family breakfast — onions, frozen spinach, black beans, and eggs with whole wheat toast. Hubby opted for no veggies and chorizo, but at least I got Big Sister to eat some veggies.

Friday was a lazy day, watching a few movies together and laying around inside. We had plans to go to the park, but the summer heat has really hit us hard this week and we just couldn’t bring ourselves to venture out in it. Dry heat or not, 104 degrees in the sun is HOT. I managed to throw in a few job applications and to do a little more work on my book — I’m excited to be able to share that with you guys when it’s finished! My adorable little muse cuddled with me on the bed before taking his nap–I love his crazy hair!

After a lazy Friday, we decided to do a complete 180 and have an absolutely insane day. My husband is a huge DBacks fan and my inlaws got us tickets to Saturdays night’s game, so the four of us and my father in law piled into a car and headed for Phoenix. I never really thought about how hard it would be to have a 4 year old and an 8 month old in a crowded baseball stadium — it was a pretty interesting experience, but I wouldn’t have traded it for anything. We picked a great game to go to — not only did we get commemorative bobbleheads, but we completely smashed the Dodgers 18-7 (a club record!). Being from New York I’m more of a Yankees fan, but since my husband is such a big fan of the DBacks it’s hard not to catch his excitement at their games. The kids actually did remarkably well considering they were completely stuck in the middle of a row of people for a good portion of 5 hours — just look at that smile! 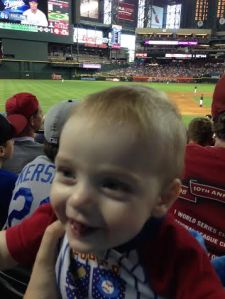 Of course, Chase Field made it a little easier for us with the Sandlot — an couple of kids play areas divided by age so no one gets trampled. Baby Boy was able to crawl around with other toddlers while Big Sister went completely crazy on the twisty slides for a few innings. I was still able to watch the game while playing with the kids, and hubby got a little kid free time to just be a guy at a sports game. I don’t know if other fields have this sort of thing, but it makes SUCH a difference for parents trying to have a fun night out with the kids! Of course they still didn’t get to bed until 11, but it was worth it for the amount of fun we all had.

Today has been mostly uneventful so far, just church and some more writing. With cleaning, writing, and a workout on the horizon it’s probably not going to get any more exciting today but as long as I get to cuddle with Baby Boy I can’t be happier!